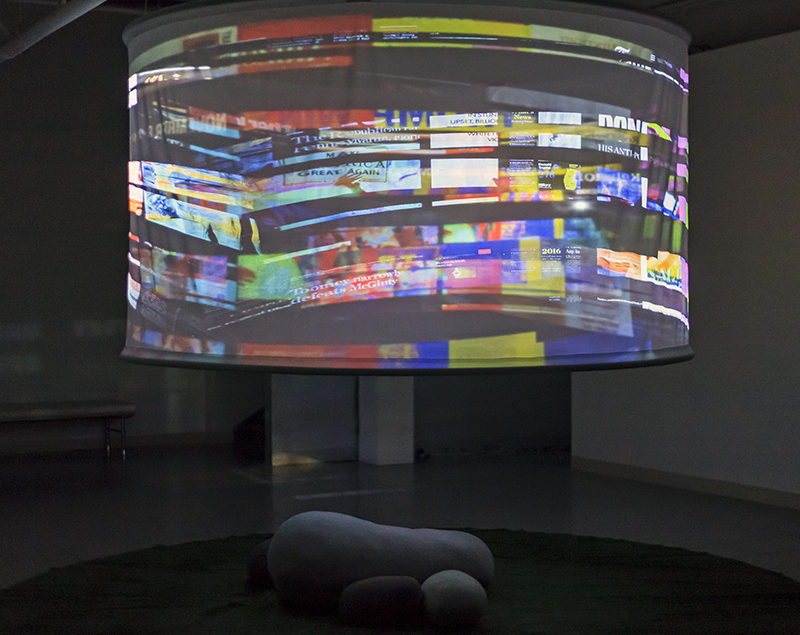 ALIGHT IN THE DARK- Artist Joyce Yu-Jean Lee’s ‘State of the Dysunion’ Extended at NJCU through Mar. 28

We live in the Information Age where we eat, sleep and ‘digest’ news 24/7. Since Donald Trump became the 45th President of the U.S., and reports of Twitterbots and other Internet propaganda machines churning out lies have become the norm for news, it seems impossible for people to get a grip on the truth.

In an effort to make sense of media messages put out during Donald Trump and Hillary Clinton’s year-long presidential campaigns in 2016, and these dystopian times since Trump’s election, mixed-media artist Joyce Yu-Jean Lee presents “State of The Dysunion” a new art installation on view at the Visual Arts Gallery on Culver Avenue adjacent to the NJCU campus. The show has been extended through Mar. 28.

When visitors enter the Visual Arts Gallery, Lee’s installation is a flight down to the basement where the space is partitioned by a black curtain. Entering the space can feel like stepping into the dark spaces of the mind, a daydream of color, images and words.

The main piece of the show, “State of Dysunion” hangs from the ceiling in the center of the gallery; a wide cylinder of white material serves as a backdrop for colorful images and words projected on it. The cylinder piece reflects the time that’s passed since Hillary Clinton’s nomination for president to the time that Trump was elected, Lee says.

“The images and the text are gleaned from news, front pages of newspapers on those particular days,” Lee says. “They are sourced from the archives of the the Newseum in Washington D.C.”

Below the huge drum-like cylinder are pillows resembling rocks and visitors are encouraged to sit under the drum for a more interactive experience. Lee says: “For this particular show, I wanted to create a space that was quiet, where you could reflect and have this circle of energy.

“We have different depictions of news,” Lee says. “Fake news has become front and center with this president. My piece, State of DysUnion presents a spectrum of news.”

In Water Wisdom, Lee shines a light on people’s media consumption. When she created the piece she asked herself important questions about her personal beliefs and the things she holds true; questions like “how do we navigate this overly saturated media landscape?”

An adjunct professor of computer graphics at NJCU since 2014, Lee earned an MFA from the Maryland Institute of the College of Art. She works at the Fashion Institute of Technology (FIT) in New York City and Cooper Union, where she’s an academic support specialist. Originally from Dallas, Texas, Lee resides in Manhattan. She also has a background in media from her years as a media strategist in advertising.

As an installation artist, Lee says she enjoys transforming the gallery spaces where she exhibits. She plays with light and darkness and how and where the works will be hung. In this show, she projects images from current events like the Women’s Marches, the California wildfires and the #metoo Movement.

“How is it our media landscape reflects the zeitgeist or socioeconomic public consciousness and is there any parallel with other things that are happening,” Lee asks. “Our country has a lot of ecologies that are out of balance, not just the media landscape. The Women’s March, the #metoo and Black Lives Matter Movements, and now our ecosystem is out of whack.”

Gallery Director and Associate Professor of Art History at NJCU, Midori Yoshimoto, Ph.D. sees Lee’s installation as a wake-up call to the overload of information that’s affecting people’s lives. She says Lee’s installation “helps us to be mindful of the way we navigate through news in our daily life.”

“I find Joyce’s video installation timely at a time when we are inundated by a flood of information and images from the media,” Yoshimoto says. “But it doesn’t present a simple critique on the state of politics. Rather, it allows us to meditate on what has happened and is happening.”