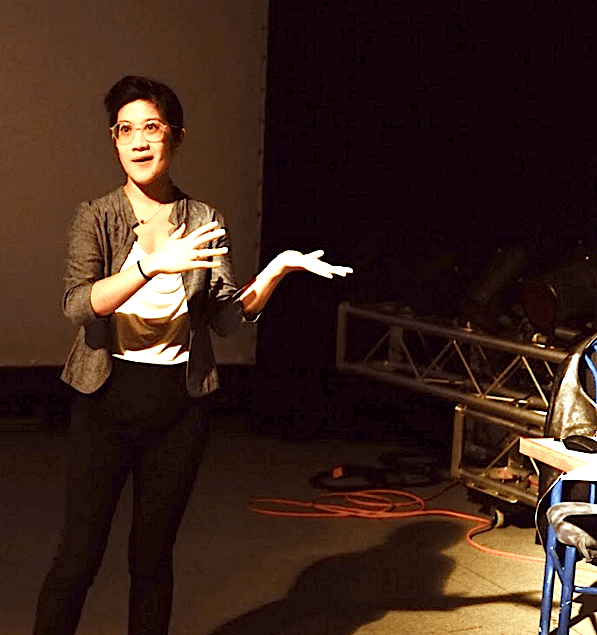 Multimedia artist Joyce Yu-Jean Lee presented footage of her art installations, which exemplify how visual culture shapes notions of truth and the “other” on Friday, Feb. 16 in Kendall Hall as part of the College’s Brown Bag series.

Lee, who teaches at New Jersey City University and the Fashion Institute of Technology, had no plans to become an artist in her early life. She attended the University of Pennsylvania as a double major in communications and psychology with plans to work in fashion marketing. Two weeks after she returned to school from her summer internship in New York City, some of Penn’s Wharton School of Business alumni who worked at the World Trade Center were killed during the 9/11 attacks. This changed the way Lee saw the world.

“If I die tomorrow, with no warning whatsoever, what do I want to be in the middle of doing?” Lee recalled asking herself at the time.

Lee turned to art to process what was happening and make sense of the influx of information and images coming from the media following the 9/11 attacks.

Today, Lee is highly selective in the way she consumes news. She does not watch or own a television. Lee believes our relationship with the media has a profound impact on the way we understand society and view others.

“While contemporary media washes over us, we can sometimes get lulled to sleep and we don’t realize what’s happening,” Lee said.

She encouraged the audience to pause and consider how media influences their perspective of the world around them.

Lee’s recent project, FIREWALL, a pop-up interactive art installation, was displayed at Lincoln Center for the Performing Arts in New York City and the Oslo Freedom Forum in Norway. The project compared the disparities of America’s Google search engine to China’s Baidu in an effort to shed insight on how internet censorship produces different results in different countries, and to create discussion about internet rights and freedoms.

FIREWALL garnered the attention of Chinese authorities when Lu Miaoqing, the only lawyer to win two cases over China’s single child policy, prepared to participate on Lee’s feminist activists panel. The night before the panel, the Chinese government reached out to Miaoqing’s law firm and forbade her to work with Lee or to ever speak publicly again. Miaoqing is now on academic asylum in the U.S.

Lee’s latest exhibit, State of the DysUnion, is on display at NJCU’s Visual Arts Gallery until March 1. This project presents a snapshot of today’s journalism, advertising and the internet influenced by “alternative facts” and “fake news” discussed in the media.

The project is displayed as an eight-foot cylindrical screen.

The first chapter shows a variety of news clippings, that include both liberal and conservative articles.

The next chapter of the installation shows drone footage of the first Women’s March in 2017, from every location around the world, overlaid with footage from this past summer’s California wildfire. The piece showcases the magnitude of the reaction to Trump’s election while the wildfire footage represents how the media builds energy of its own.

Lee uses her art to help figure out how to navigate personal agency in the midst of today’s confusing media landscape.

In her 2012 performative activist exhibition, Made in China, at (e)merge Art Fair, Lee dressed up as a Chinese factory worker with a peddler’s cart who created limited edition works of art. Behind her, a screen displayed other factory workers making the products she was selling. This project served as an effort to point at the hypocrisy surrounding the U.S.’ relationship with China and trade.

“Why is it that the pinnacle of American design, which we know of as Apple, is not affordable to the Chinese?” Lee said, challenging the damaging concept of elite design. “And why is it that even though most of the objects are manufactured in their country, they have to make fake stores in order to buy these black market, bootleg items?”

Lee feels that artists have a specific role in society — to function as a mouthpiece. They produce works based on the emotions and conditions of the present day, operating as a societal barometer.

Through her art, Lee hopes to continue to serve American culture by highlighting important issues that often go undiscussed, and by challenging our country’s standards for communication.