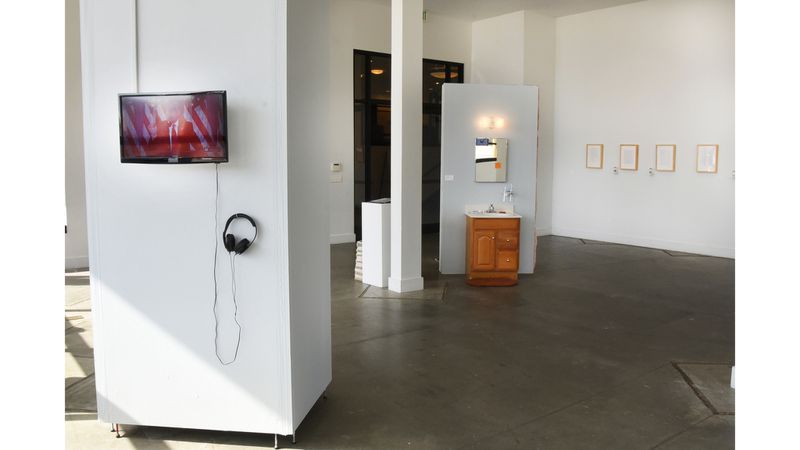 I put on the headphones that are part of Joyce Yu-Jean Lee’s ‘Red vs. Blue Polarity,’ in the group show “Whatchamacallit” at Gallery CA, and a noisy barrage of cameras clicking and flashes flying is the only audio accompanying a video of Donald Trump at a press conference, gesticulating as he does with his small hands; his crusty, dry lips forming hateful nonsense. The video is overlaid with a red filter—the color itself one that conjures anxiety, fury, heat, and the Republican Party.

A video screen mounted on the other side of this wall features Barack Obama, whose general body language and demeanor many of us would describe as calm, collected, careful—especially in contrast to the current president. This clip is overlaid with a Democratic Party blue, and the paparazzi sounds that are paired with Obama seem less frantic, suggesting the media and public’s 24/7 obsession with and outrage over Trump. Without getting heavy-handed, Lee’s piece makes me wonder if my own anxiety watching the Trump video (markedly less intense while watching Obama) comes from the way Lee presents them, or if it’s just an automatic reflex, a triggered projection.

Lee’s piece fits into the scope of “Whatchamacallit” more tangentially than some of the other works, though it calls to mind the slew of thinkpieces that came out after the 2016 election, mostly written by white men declaring that identity politics weakened the Democratic Party and got Trump elected. In his statement about this show, curator and artist James Williams II mentions a 2015 New York Times article called “The Year We Obsessed Over Identity.” Williams notes that that year was no different; for most of his life he’s been obsessed with his own identity and its many intersecting facets. And so, this show features work by seven artists who overtly and delicately explore identities—their own self-claimed ones, and the ones that have been attached to them.

In the back corner of the gallery, Diane Kuthy and Olivia Robinson’s ‘Swaddled’ quilt uses imagery from an American poster campaign/propaganda project from 1942 called “This is America… Keep it Free.” These scenes include a white man pouring concrete for a walkway while a white woman and child observe, white children studiously taking notes, a white working class man smoking a pipe, among others. As Kuthy and Robinson explain by way of a printed fabric booklet hanging next to the quilt, the “This is America” campaign promoted these quotidian scenes of exclusively white people, a default “ideal” depiction of what post-war America would look like, having defeated the “enemy.” In the quilt, the artists reproduce a grid of nine of these images, the details more or less erased by the quilting method they used, fittingly called “whitework,” but the bare faces and hands of the people stand out in uniform shades of orange-white and pink-white. Digging up examples of the pervasive damage that whiteness causes—and trying to reckon with it, as Kuthy and Robinson have done here—is a step toward taking it all apart.

Nearby, Texas-based artist Lawrence Lee depicts a tense world full of symbolic and stereotyped creatures. In Lee’s large, intricate drawing, a Boschian scene shows humans, alligators, birds of prey, foxes, and a disembodied head—to name a few—duking it out in an enormous boxing ring in the middle of a dark, brushy field. On the sideline, more figures emerge, like a small fairy-like creature, a dove, and a woman with flowers in her hair, bearing a resemblance to Billie Holiday. As the characters in the middle clash, on the right side of the drawing a grid of about 50 more characters all turn their attention to the ring. These characters—most of their faces painted pure black with ink, many of them resembling the racist “pickaninny” cartoon characters—also act like a fragmented Greek chorus to this dramatic scene. Every row or so, one character says a word or two: “And… again cold. Remembered Hotly. And once… dismembered ever so… slightly.” With the chaos in the ring, the rhythmic text, and the characters—each unique, and many dressed up or disguised in animal furs, robot costumes, or head wraps—Lee riffs on the visual language of these characters and gives them power.

Joining an endless chorus of artists, writers, and historians, in his piece ‘How does it feel to be a problem?’ Paul Rucker draws out white America’s failure to recognize the myriad problems it has created for African-American people, and shows that instead, the country has often turned the blame back on African-Americans themselves. A stack of books with titles like “An American Dilemma,” “Studies in the American Race Problem,” “Negro Problem Solved,” “The Negro: The Southerner’s Problem” and so on sit on a pedestal underneath a vitrine. One report (from the “Report of the Governor’s Commission on Problems Affecting the Negro Population” published in 1943) leans against this stack, open to the first page, which frames this initial report on the relationship between the police and “colored citizens” as such: “[T]he Negro population has become more conscious of its just rights and has begun to assert them with increased vigor.” It goes on to say that this has, well, gosh, somehow led to the police abusing, targeting, arresting, and charging black people with crimes disproportionately to the rest of the population. Which is certainly a “problem,” though one that whites don’t see as their own.

This “problem” feeds into the curator Williams’ two pieces on display. A small bathroom sink and mirror, decorated with a simple bar of soap, some toothpaste and toothbrushes, almost goes unnoticed. A post-it note stuck to the mirror offers a small push of encouragement in spite of a bad day. Looming in the upper corner of the mirror, a screen plays an animation of a cartoon blackbird in a baseball uniform trapped on either side by two enormous white gloved fists which pound the ground menacingly. Williams’ other piece, titled ‘Blk/M/5’8″/Checkered Sweatshirt/Dark Jeans/Brown Boots or in short, Self-portrait with Checkered Sweatshirt,’ a bodiless flannel shirt, painted in oil, has its arms raised up in surrender. Where the head would be is a screen with two hands making a shadow profile on the wall behind, a face with African features. The hands move subtly, making the figure’s mouth move until the hands abruptly separate, the head appearing to explode.

In his own work, Williams tries to balance shock and violence, study and subtlety—and he brought that same rolling sensibility to this show’s curation. Perhaps the quietest piece in the show, Mandy Cano Villalobos’ ‘Letters from Chile’ is a series of framed, handwritten letters with their words painstakingly cut out and piled into small jars on shelves next to the frames. I stood for several minutes with these, squinting back and forth at each, trying to pick up any word, and I couldn’t. Letter-writing is an intimate form of communication, and here, as hard as I try, I’ll never fully access what these letters say—though I can project and strain my eyes here and feel something about care and longing, boundaries, barriers. In this context, the artist seems to beg the question: Can we ever really be “seen”?